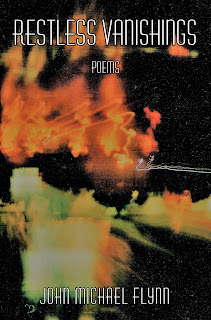 Name-your-price eBooks (most formats) at
Smashwords

Buy the print edition for $6.20+s&h at
the CreateSpace eStore*


As I wheel her about hoping for trust
her occasional smile
becomes conversion enough
to compassion bolder than religion.
When I greet her parents,
their faces flexing through the strain
of compromise and exigency,
I hear no claim from them of anything final,
no answer beyond unconditional care,
having long ago accepted their daughter’s tantrums,
vastness of loss, memories of her fall,
the bleak poems she scrawls by candle light.

When alone again she shares a rare confession.
Messengers in the stars
preach love will not conquer ignorance.
She admits to not always believing those stars.
Later, we watch on television
silken limbs of ice skaters spinning.
How she laughs until in tears
when my left shoe sticks to gum on the floor.
I expect her to say that now I know how she feels.
There is no such remark, only long silence.
She asks, at last, if I will roll her to bed.
She wants to dream of cutting a figure eight.


In his pocket, in his hand
trust a man
who fears a blade
he adores.
A man who fathers
the neighborhood
when others cannot.
With the largest hands
you’ve ever seen
and a laugh that scares you
more than the basement
stairs at night.
Radiant, sanguine
smiling man who fills
the puny galaxies
of your boyhood ambition.

We returned
from a fishing trip
in Gloucester
with a trash barrel
full of haddock and cod.
I climbed into his truck
tried to pull it out.
His sea-filled eyes gleamed.
He lifted that barrel
as if it was empty.
Let me drag it with him
to a backyard table.
Let me help. Me
of all people
cleaning fish, dodging
flies in the sun

worthy of his good knife.

JOHN MICHAEL FLYNN taught for one year, 2015, as an English Language Fellow for the U.S. State Department at the Far Eastern State University in Khabarovsk, Russia. His poetry collections include Keepers Meet Questing Eyes, and Moments Between Cities. In 1998 he earned the Erika Mumford Prize from the New England Poetry Club. A resident of Virginia, find him on the web at www.basilrosa.com.