Saints in Limbo by Kyle Hemmings 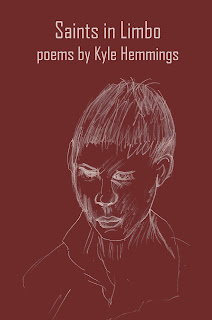 
He discovered the cure for universal cancer but mislaid his formulas. A preposterous poker-faced girlfriend said she wanted to have his baby & he replaced her with a cracked mirror. He predicted the world would end three minutes after it did. His theory of time: We're older than we think. What's called living is really the act of remembering ourselves in slow motion. I'm merely stuck on STOP. At the age of eight, his mother gave him a red rubber ball that bounced once & never came down. She said God works in mysterious ways. The ball returned years later in the form of a meteorite that nearly killed him. He went blank, walked away with an alter-ego, bits of rock lodged between its teeth. The traumas of his early years formed lapses in his lovemaking. He woke up lonely not recognizing himself in reflections. Dogs stole his shoelaces. He saved an archbishop from a dangerous fall by using his body as a canopy of impersonal bones & tissues. After the bishop thanked him, promised him a seat in heaven, they became each other. The world was a globe of interchangeable parts that never quite added up. He tried reassembling his life from 16 track tapes & hit replay. He lost track of the time. The tapes looped endlessly & erased him.

KYLE HEMMINGS  lives and works in New Jersey. He has been published in Elimae, Smokelong Quarterly, Blaze Vox, Matchbook, and elsewhere. He loves 50s Sci-Fi movies, manga comics, and pre-punk garage bands of the 60s. His latest collection of poems and prose is Future Wars published by Another New Calligraphy.