"Chansons of a Chinaman" by Changming Yuan 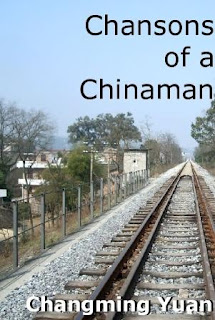 "Chansons of A Chinaman is beyond a collection of poems, which are necessarily personal and sensorial. It is, more notably, classic in the modern, metaphysical in the witty and aesthetic, China’s wisdom and tradition in the English language, for the world; it is a Chinaman (note the tone) singing his own chansons, rather than a forever-silent Other being spoken about, uttering his own voice rather than being uttered for, representing himself rather than being represented. As such, it is nothing less than a great contribution to a great cross-cultural dialogue."


"At his best, Changming Yuan's writing both thinks and feels poetically. Add to this his subtle and bold incorporation of wisdom (a very rare commodity in western literary circles today), and we have someone and something interesting on our hands."

"I want to see the world through Changming Yuan's eyes. Where I am reminded that Guinea Pigs are not from Guinea, or pigs. This is the place that the spectacular is lifted out of the mundane. It's where my poetry wants to live."

"Changming’s language is artful in its simplicity: his conceits are charming. Balanced, writerly phrases marble his poems. His senses are always new and his loyalty to them, and to the sense they make, always pleasure."

"Sensual, excessive and sometimes surreal, Chansons of a Chinaman is a rare find in contemporary poetry written on the North American continent; Changming Yuan's work is sincere, without a trace of posturing. The bonus: he’s smart enough to deftly undercut his sincerity with quirk, swerve, and wit."

--Alan May
editor of Apocryphaltext

Unlike those authors of Asian origin who were either born or raised in an English-speaking country, Changming Yuan grew up in an impoverished village in central southern China and did not start to learn the English alphabet until he became an ESL student at Shanghai Jiaotong University at the age of nineteen. After getting his first master’s degree from Tianjin Teachers’ University, he worked as a lecturer and administrator at Tianjin Institute of Foreign Trade (now part of Nankai University), and authored three books as well as a dozen journal articles on translation and the English language. While studying at the University of Saskatchewan, where he received his MA and PhD in English, Yuan founded the Saskatchewan Chinese Times and was its editor for two years. Yuan began to write poetry in English during a family trip to Banff in 2004 and currently teaches writing in Vancouver, where he lives with his wife and two sons.

A sampling from "Chansons of a Chinaman"


for years I sought light in darkness
with my eyes open wide as my mouth
I called, I sang, I prayed, I pleaded
for rays that might come down from above

shadow, even in a midnight dream


At Sunrise in Summer

Why not get up and open
Every skylight on the roof
Turning on the sun’s big tap
To take a morning shower
And cleanse all the darkness
Accumulated on our skins
tattooed by the night?

Close your eyes
Stay still
And you can feel
The moon’s silver needles
Softly pointed
Penetrating tranquility
Into your head, hand and heart
Like Chinese acupuncture
Flying balmy filaments
At you and me alike
Although ten thousand miles apart

Open your eyes
The light is streamwater
Spattering down from heaven
Upon your shaded shoulders
Whirling up and splashing about
Into stars, if you can
Catch just one droplet
Hurling it into the backyard
Out of the broken window
Of your fenced mind
The symphony of night
Tender

delicately hung is this earth
a bluish cage in the universe


The Statue at the Square

No, we never planned it that way
But it so happened this seventh summer
I took my twelve-year-young son
To my father’s native village among hairless hills
In the far east end, the other side of the world
Which he had left as a starving orphan
And returned with me in the Mao suit
Like a magic-toyed boomerang
When we were both at Allen’s age
For the first times in our lives

Last time, my father forced the Little Red Guard in me
To kowtow, burn joss sticks and paper money secretly
For his parents, whose dialect had survived
Though I understood it only half-heartedly

This time, I cajoled my boy to grasp a handful of earth
From the grave of my grandma worshipped by villagers
(Her humaneness has supposedly made her a local deity)
And smuggle it to the backyard of our home in Vancouver
Like some foreign seeds prohibited at the customs

As we departed, again, our clan elder chanted:
Under the shade of a new highway
This old grave will soon be erased…

Slim, tall and sedate
In the fluffiest garments
Of no human design
Each hill stands like a female model
Trying to display her charm and dignity
As if in a grand fashion show or
Like a fairy maiden at a casual party
Lost in a game unknown to passers-by

I cannot help feeling deeply embarrassed
When my allen asks: who are they, dad?

Close to the bank of the Yangtze River
Sits an unearthed tripod
That has embraced
Spring water
Burning incense
Sesame oil
Rice wine
Persian perfume
And British opium
The tripod is none other than you
But what is the tripod?

Then stroke by stroke, again
It rose right
Upon
Each slate of white


The Peril of Watching Too Much TV News

If you watch too much tv about what is going on beyond your living room
You go quite mad
That’s what marco polo used to say every time he saw someone
Watching the big well-washed mouth yabaaing in front of a bigger camera
All their reporters and editors, none of them a true fly on the wall
With their freaky bias and nancy ways of looking at others
Selecting and shuffling words and pictures about evil soviets
Demon chinese, civilized lamas, angel-like looters
Humans biting dogs, johns’ caps on jills’ heads, and the deer called a horned horse
All of em juggled and tripping over one another in your little fragile brain box
Well, it’s a bit like unleashing a whole century’s illusions out of the corral
To stampede right over your ears and eyes
All those colored or uncolored lies
Whirling around inside your poor skull
Beating up storms of yellow dust
So overwhelming you cannot see or hear with your own senses
The real other world which is just the real other world
They claim to be the bars helping cage the most ferocious among us
Yet they are more ferocious than the crowned lion preying around in the jungle
Listen – what I say is
If you believe everything CBB or NCC reports about their edited worlds
You go quite mad

we chinamen, half and quarter chinamen
children of eight or sixteenth chinamen
constantly pounded with a peculiar pride
over our ancestry's four great inventions:

they chinese, half and quarter chinese
children of eight or sixteenth chinese
baffled with belief, brief belief
that their unknown ancestors happened to invent
the wrong stuffs in the right times
or the right stuffs in the wrong places


Chinese Chimes: Science or Superstition:
The Ancient Theory of the Five Elements Accounts for Us All

1 Metal (born in a year ending in 0 or 1)
-helps water but hinders wood; helped by earth but hindered by fire
he used to be totally dull-colored
because he came from the earth’s inside
now he has become a super-conductor
for cold words, hot pictures and light itself
all being transmitted through his throat

2 Water (born in a year ending in 2 or 3)
-helps wood but hinders fire; helped by metal but hindered by earth
with her transparent tenderness
coded with colorless violence
she is always ready to support
or sink the powerful boat
sailing south

3 Wood (born in a year ending 4 or 5)
-helps fire but hinders earth; helped by water but hindered by metal
rings in rings have been opened or broken
like echoes that roll from home to home
each containing fragments of green
trying to tell their tales
from the forest’s depths

4 Fire (born in a year ending 6 or 7)
-helps earth but hinders metal; helped by wood but hindered by water
your soft power bursting from your ribcage
as enthusiastic as a phoenix is supposed to be
when you fly your lipless kisses
you reach out your hearts
until they are all broken

5 Earth (born in a year ending in 8 or 9)
-helps metal but hinders water; helped by fire but hindered by wood
i think not; therefore, I am not
what I am, but I have a color
the skin my heart wears inside out
tattooed intricately
with footprints of history


Chinese Chimes: The Confession of A Calendar
it all began with an animal race Emperor Jade called to amuse himself and his earthly subjects...

Rat
yes, i admit betraying the cat as my only close friend
but i won the race, with my head rather than my legs

Ox
to honor my contract with the yellow sun
i eat green grass, yet give red meat to man


Dog
given my canine camaraderie and pack mentality
i feel at home before, among or behind soldiers

Changming Yuan's works, including those sampled here, have appeared in the following publications: